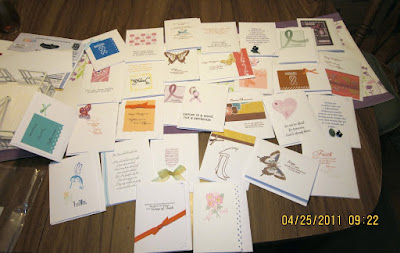 Here's a little of the reason I've not been posting much lately. I had promised to make 30 cards for the Relay for Life that a friend is sponsoring and I needed lot of time - babysitting it taking up way too much of my craft time! And I also recently began selling some of my cards locally in a little shop, so I had to make about 100 miscellaneous cards for that and get them into the shop in early April.
So.... I've been a little swamped!
But I like how these turned out. I hope she does too. This Relay for Life is scheduled for May 14, so that's coming up pretty quick. They are coming to get them tomorrow so they can finish making up some little gift bags she hands out! Each is different and although originally I had intended to make most of them for breast cancer, Lindsay had told me that they don't know specifically what kind of cancers the survivors had (except for a few of us), so that didn't work out. And I had a couple cute stamps sets I had intended to use! But luckily I recently won a great set - so I utilized it and also several freebie images I found.
Posted by terriavidreader (IN-USA) at 4/25/2011 10:37:00 PM

Wow , Terri , what a production !! And for such a good cause....Compliments !! They all look great. Love from Holland , Christa.

Yea, I'm quite proud of it. Luckily my style is mostly CAS! Since they are all different.

Well done on producing all your lovely cards. There is a little surprise for you on my blog if you want to pop over and take a look! x

Wow thats awesome! Congratulations on your win on Pink Gem!

Fantastic! All so lovely and for such a good cause. I hope you do well with your sales.
Blessings Bernie

What a Nice gesture I myself just went to relay for life last night I go w/ my mom every year shes a breast cancer survivor for 3yrs. now.

P.S. your cards are very nice and look like they took a lot of time to construct.