Stephanie Severin of Ingenious Inkling (isn't she cute!)
sent me a large USPS box (actually HUGE is more like what it was) and it was filled with tons and tons and tons of goodies! I won this on her blog a week or so ago, and she asked what we would do as a RAK. I told her about my making cards to take to a local Healthcare facility where people go to recovery from surgeries and such. And I was the lucky winner.
I could hardly believe my eyes (or my arms when I tried to lift this box!). It was packed snugly with all kinds of stamps and some punches and huge amounts of papers and I don't know what all!
She was purging her stash area, and I benefited hugely. This was a wonderful idea for blog candy. A great idea that down the road I intend to emulate. And it's not the size, but the idea of sharing that's great. Something you may feel you no longer need, can benefit someone else. And as long as the person knows this up front, I think it's a fantastic idea!
I hope to be back later with a photo of some/most of the goodies! 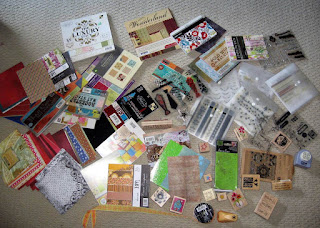 Woo Hoo Wow... what a great win!It's like Christmas when even the tiny treats arrive itn't it! 8-)